A cowboy gun still finds a home on the range (Photo: Don Summers/Guns.com)

To say a set of guns defines Texas is a quagmire, a real schism of a situation. The Lone Star State is diverse both in its residents and its geography, not to mention there are loads of guns to talk about. Texas is the most heavily armed state in the union, making the selection of guns that define it that much more difficult.

All of that said, Guns.com has scoured the history books and listened to popular opinions to gather a list of guns that we think defines a broad range of Texas and its history. 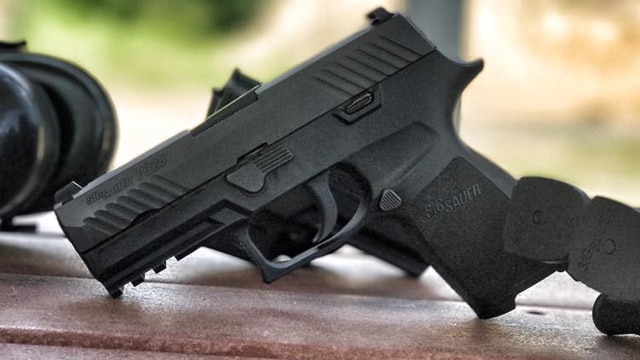 The Sig P320 on display during a demonstration. (Photo: Sig/Facebook)

For a Texas lawman, there may be no bigger honor than to be deemed a Texas Ranger. It seemed only fitting that we pay tribute to this elite unit of Texas investigators. With 166 commissioned Rangers, the Texas Ranger Division is a statewide investigative law enforcement agency housed under the Texas Department of Safety. Based in Austin, the Rangers have been responsible for investigating crimes and tracking down fugitives, among other duties. Officially established in 1835, the Rangers have been present at some of the most significant events of history in Texas.

In 2018, the Texas Rangers selected the Sig P320 as their official sidearm. This move retired the long-standing Colt Commander as the preferred sidearm, embracing the modern innovation from Sig. We aren’t even going to mention that Chuck “Walker, Texas Ranger” Norris is a Glock man. Well, I guess we just did.

The Guns of Frank Hamer 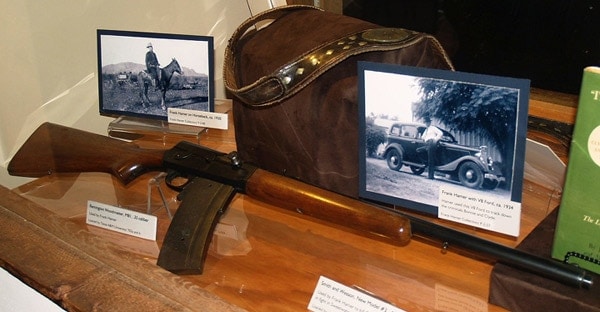 The Remington Model 8 used by legendary Frank Hamer on display.

Frank Hamer embodied the Texan spirit and honored fellow Rangers when he headed out in search of the notorious Bonnie and Clyde in 1934. Hamer was called out of retirement to track the gangsters, who had left law enforcement exasperated after two years of crime and bloodshed across several states.

After 102 days of tracking the Barrow gang, Hamer and his crew found the infamous Bonnie and Clyde, ending their crime spree in what could be called a dramatic fashion.

Hamer, who survived more than 50 gunfights before his encounter with the infamous duo, was known to carry a Colt Peacemaker he called “Old Lucky.” He was also known to use a Smith & Wesson Hand Ejector, Savage Model 99, and Winchester 94. When things got hairy, Hamer reverted to guns like the Colt Monitor and Remington Model 8. 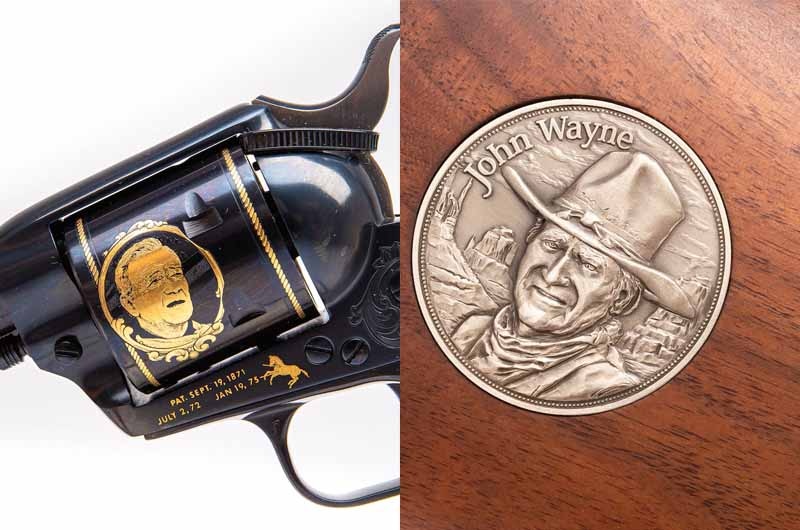 Tributes to The Duke.

When thinking of some of the all-time great Western films one has to recall the many iconic roles played by John Wayne, aka The Duke. Whether he was touting the customary Colt Single Action Army or using the Big Loop on a Winchester 94, he enthralled generations of kids with Western flair and Texas toughness. As a result, The Duke gained a huge following and a line of memorabilia on par with Elvis.

Though Wayne was born in Iowa and only filmed two of his movies in Texas, the state recognizes The Duke as an honorary Texan. In 2015, the Texas government moved to make May 26 “John Wayne Day” to commemorate the iconic film star. “When you think of Texas, you think of John Wayne,” Lieutenant Governor Dan Patrick said.

Eager to celebrate Wayne’s legacy? We currently have a beautiful and rare John Wayne Commemorative SAA and a couple of Winchesters honoring one of the greatest movie stars of all time in our Vault. 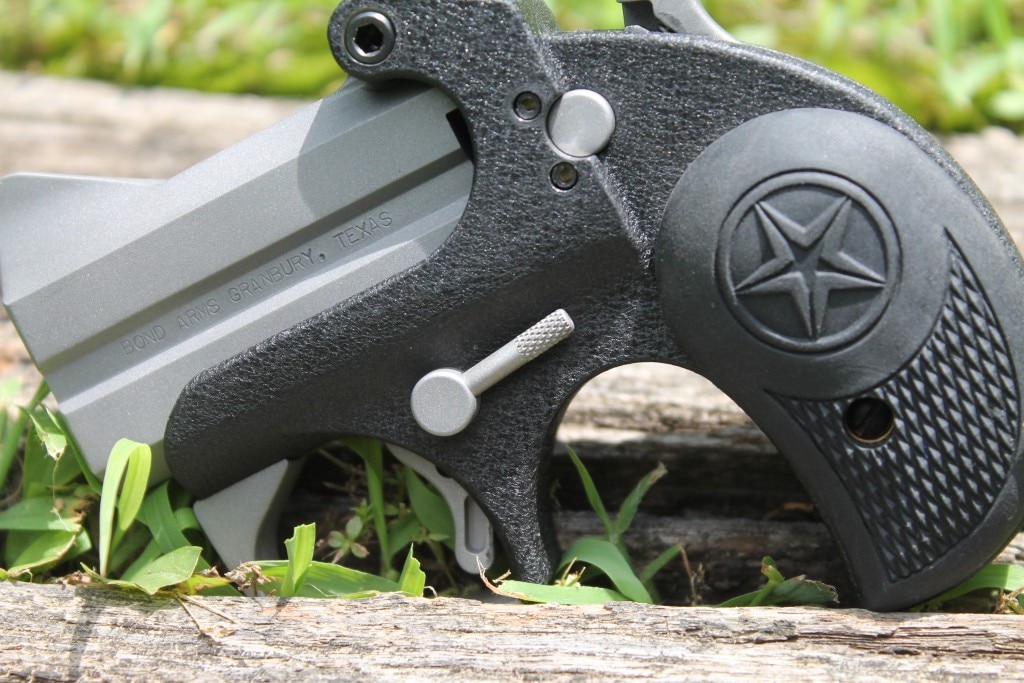 If you’re looking for a modern-day derringer then Bond Arms is a one-stop-shop. Located in Granbury, Texas, the company has been around for 25 years. Bond is quick to remind its consumers where it’s deeply rooted with, “Proudly Made in Texas by Texans” displayed front and center on its website.

Bond Arms produces several high-quality derringer and bullpup style handguns but is better known for its derringers ranging in caliber. To honor the Lone Star State, Bond Arms has three models bearing its name – the Texan, Texas Defender, and the Texas Ranger.

Though Bond Arms is prolific, several other gun makers make Texas home. Make sure to check out our list here. 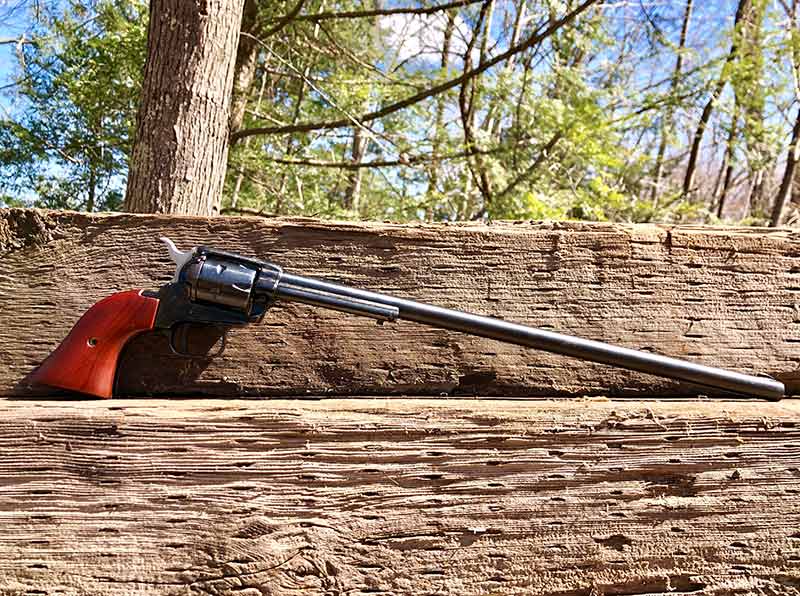 We couldn’t create a Texas-inspired list without throwing in some ridiculously oversized guns – after all, there is truth in the saying “everything is bigger in Texas.” The Ruger Super Redhawk, Smith & Wesson 500, and Taurus Judge, among many others, immediately come to mind as guns you might see a Texan toting. No one blinks an eye in Texas a dually pulls up with a Barrett hanging off the rifle rack – and that’s why we love the Lone Star State.

If you don’t feel like going big caliber you can still show off that Texas spirit with a gun like a Colt Buntline or a Heritage Buntline if you’re on a budget. Oversized guns are a normal part of life in Texas and it’s, in a word, refreshing.

The post Guns That Come to Mind When Thinking Texas appeared first on Guns.com.

Former CIA officer Jason Hanson has written an entire book on the use of the deadly stiletto. Not only that, but he even offers a combo package where you can get a stiletto knife along with the book. His is one of the best books I’ve seen on the use of this wickedly cool blade. You can get ...

Have you ever been in a dollar store and seen one of those cheap one-dollar first aid kits? There...

Beat ANY Bully Or Antifa Thug

News over the weekend was that more and more areas of big cities are being taken over by “...

Turn Your Hands Into Knives

This is great stuff that will turn you into a human weapon, with or without a knife in your hands, n...

The lying about the pandemic hasn’t stopped

…And if you’re going to rely on a face shield to protect you out there, especially during the pandem...

Limited Time – Get Your Shockwave Torch For Over 50% Off

This Weapon Will Be Illegal Soon…

This recent pandemic has proven, more than ever, that SMART citizens focus on homesteading - on prep...

This recent pandemic has proven, more than ever, that SMART citizens focus on homesteading - on prep...

“Old School” prepping is on the way back

Tactical Survival Guides from Skilled Survival is an instant library of "old school" survivalist an...

I almost go into a fight at Wal-Mart

The other day I was out trying to make a last, fast run for supplies at the local Wal-Mart… li...

What to do if you have no TP or bottled water

I know that a lot of people are dealing with shortages from the panic buying going on out there. To...

I tried to buy survival food and couldn’t. . .

With people making their own hand sanitizer because the stores are sold out, it's just a matter of t...