Henry Model X: The Old West Gets a Modern Flare

The post Henry Model X: The Old West Gets a Modern Flare appeared first on Guns.com.

The Henry Model X was teased in 2018 but is now finally a reality. (Photo: Sean Curtis/Guns.com)

In 2020, Henry released the Model X which was, quite simply, a tactical lever-gun. Gone are traditional lines and materials in exchange for features more suited to home defense or truck gun scenarios. Want to mount a light? There’s M-LOK for that. Fiber-optic sights? Yep. Picatinny rail? Yep. Threaded muzzle? Hallelujah!

I’ve served in law enforcement for over 20 years and was a SWAT team commander for a while; therefore, the tactical side of my mind runs pretty deep. Appreciation for gear, tactics, and weapons in this field is a well-populated neighborhood in my head, but it’s across town from where the Old West dwells. When the Henry X made its debut, these two worlds collided. 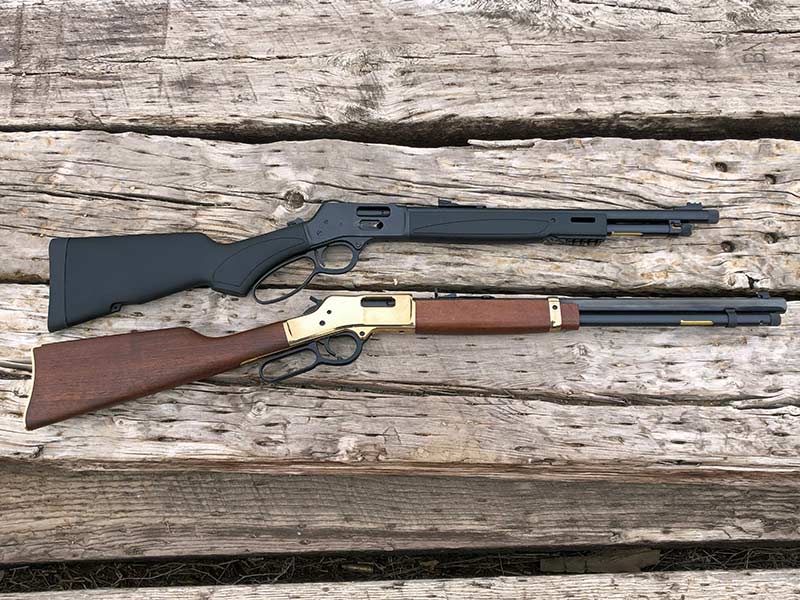 Compared to a Big Boy, you can see the places where Henry shortened and altered the design. (Photo: Sean Curtis/Guns.com)

I had to stop and give some thought to what it was I was seeing with the X. The departure was definite, but the base of the original weapon was still plainly evident. There was no wood, there was no brass. The checkered, wooden handguard of old was replaced with a rail capable of accepting M-LOK accessories. The Model X brings a side-loading gate—a brand new feature for Henry. This was critical for this model, but more on that later. 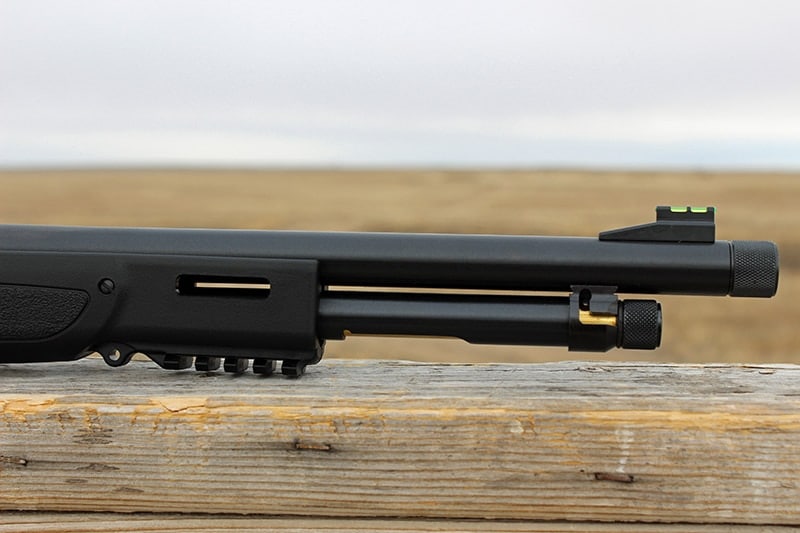 Henry sent me a Model X in .357 Mag. and I quickly rode out to the range for testing. Hornady supplied the ammunition with the LEVERevolution lineup catering to lever-action shooters. This series utilizes a patented elastomer Flex Tip so there’s no explosive primer trickling in the magazine tube. 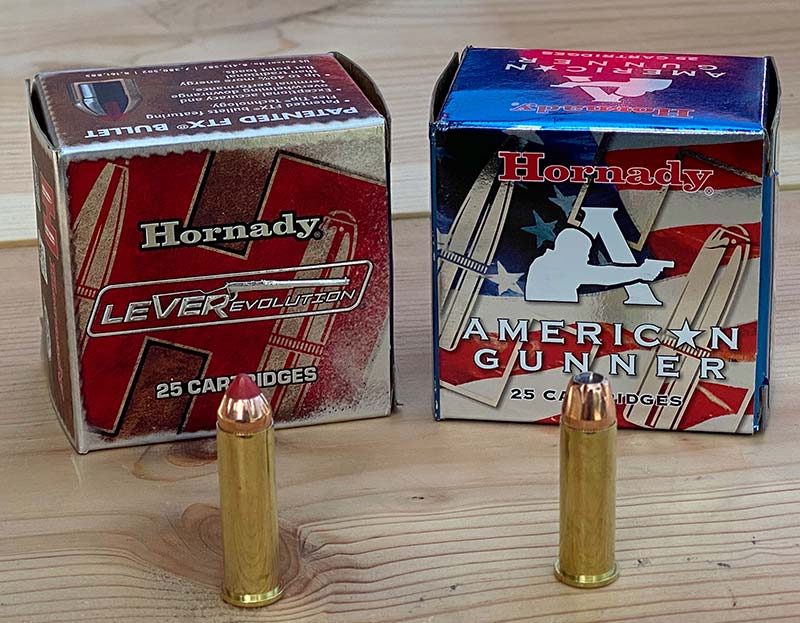 Hornady was kind enough to send out some .357 in their LEVERevolution line, plus .38 in American Gunner. They all fed well and were accurate while keeping magazine anxiety at bay. (Photo: Sean Curtis/Guns.com)

In addition to an ammo box full of 140-grain .357 Mag LEVERevolution rounds, I also loaded up American Gunner 125-grain .38 SPL, and an odd assortment of other brands in both calibers before heading out to the range. The 17.4-inch barrel paired with the calibers had me wondering what the results might look like on paper.

To test the accuracy of the Model X, I used the CTK Precision P3 Ultimate Shooting Rest. Upon setting up in the rest I was immediately impressed with the sights. The front sight is a nice, bright green dot, while the rear is two bright red dots. My first outing was on a day filled with cloud cover, yet the sights still picked up enough light to glow. 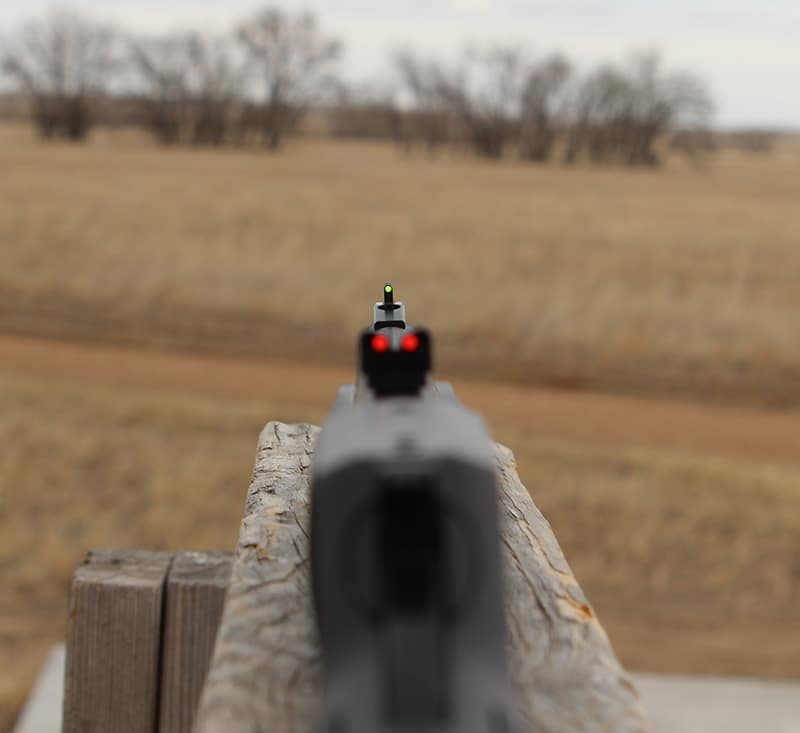 The sights are outstanding, even on overcast days. I like the distinction between the two colors.
Another departure, this Henry has a grip cap with subdued badging. (Photo: Sean Curtis/Guns.com)

The initial readings, starting at 25-yards, were all around 1-inch groupings with Hornady ammunition. Eventually, I pushed out to 50-yards, and the groups only expanded slightly — around 2- to 3- inches. I was able to hit a 100-yard steel target repeatedly but did not calculate groups at this distance.

As far as general function, the Model X was strictly solid. Having the side-loading gate was huge, as compared to the previous loading mode of using the magazine tube. Unscrewing, removing the magazine liner, then loading was anything but tactical. Now, that liner can be bypassed simply by feeding rounds through the side-gate in the receiver. With a total capacity of 7+1, I would load the Model X and run through eight rounds quickly. With practice, it’s fast and in .357 the recoil was light and manageable, .38 was even lighter.

In front of the Picatinny rail, you can still load the magazine the old-fashioned way. (Photo: Sean Curtis/Guns.com)

What makes the Model X such a departure from Henry’s line? It’s all in the features. The furniture is black, polymer, and weather-proof. Next, the barrel is a bit shorter at 17.4-inches so that makes it wieldy in tight corners.

The larger loop on the lever takes into account gloved hands but isn’t so big as to leave hands swimming needlessly. The stock has more of a pistol grip with a grip cap, plus there’s an actual recoil pad on the buttstock. 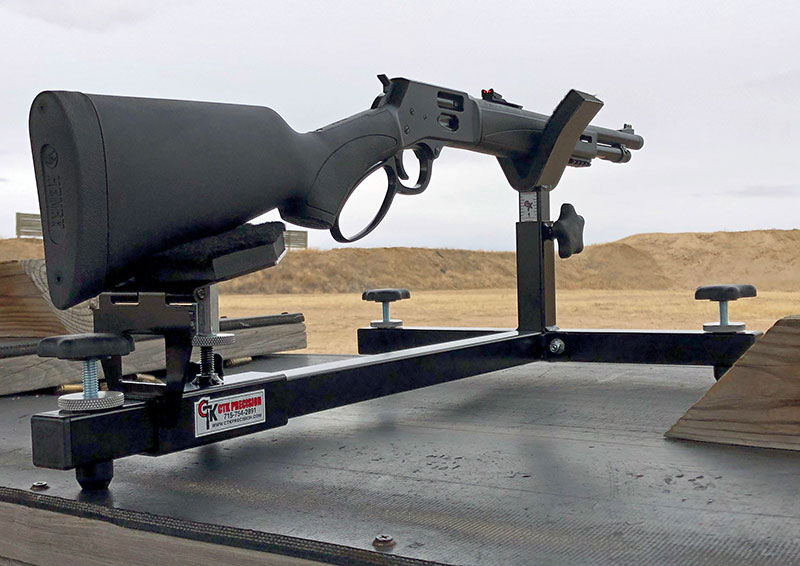 The forend has M-LOK slots on the 3 o’clock and 9 o’clock positions with a Picatinny rail on the bottom. The side gate allows shooters to load the magazine at the receiver so this opens up the muzzle for—you may have guessed it—a threaded muzzle for suppressors sporting 5/8×24 threads. Screwing on a suppressor would have been silly in previous models because you’d have to take it off every time you reloaded. That has been rectified with the Model X making suppressor easier. 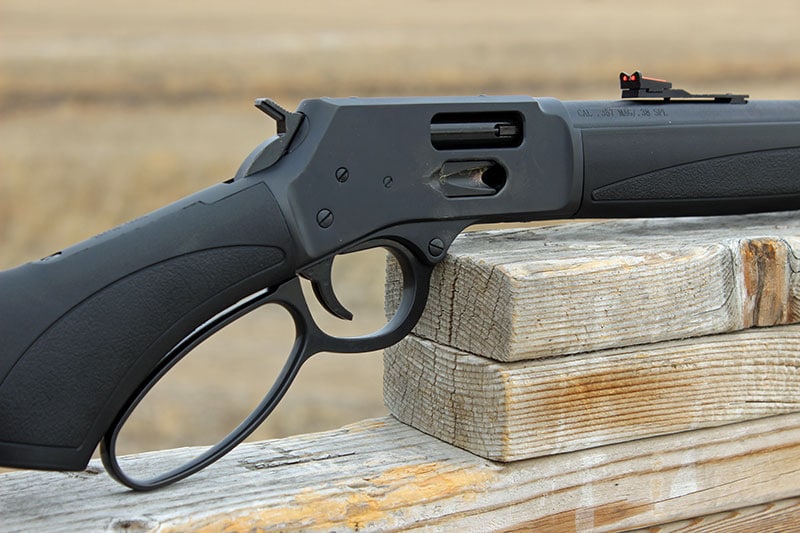 The back of the gun features a larger loop, a fiberoptic rear sight, and Henry’s new side-loading gate. (Photo: Sean Curtis/Guns.com)

While I could not arrange a suppressor in time for this review, I did add a couple of different lights on for the bottom and a Trijicon MRO green dot for the top. Due to the comb height, I found it necessary to depart from the Henry Picatinny rail on top and use one from Ranger Point Precision. Even with a flat mount for the MRO, the normal Pic-rail from Henry was a bit too tall. Ranger Point Precision’s rail mounts closer to the top of the receiver and had me obtaining good sight picture through the optic. While the fiberoptic sights were outstanding, I wanted to have something reliably giving me target information in the dark and the MRO handled this in spades. 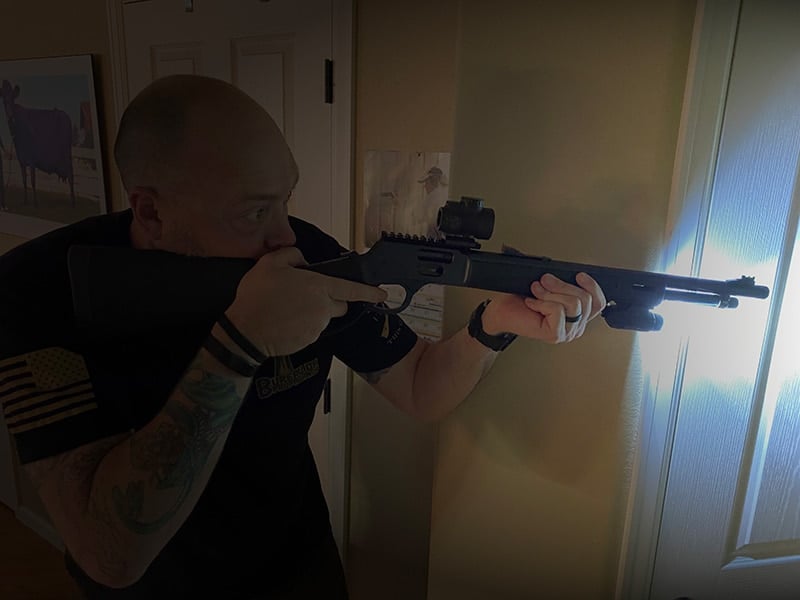 By mounting a light and the Trijicon MRO, you can ardently protect your home even in the dark.
CTK Precision’s excellent gun rest allowed me to wring out the best accuracy. (Photo: Sean Curtis/Guns.com)

All-in-all, this rifle is outstanding. It fed reliably, shot accurately, and at 7+1 capacity on the .357, it may be a viable defense option. I’ve always appreciated Henry for building quality firearms made in America. To me, they represent the Old West while combining beautiful aesthetics with purposeful function.

The post Henry Model X: The Old West Gets a Modern Flare appeared first on Guns.com.

Newsletter Readers Get 30% OFF Automatically

Join our daily newsletter to get free entry into our buyers club and 30% off almost everything in the shop instantly. No codes. No strings. No BS.

(No thank you... I like paying more than everyone else)

In case you have things in your cart, here is a temporary (one-time-use) code to get 30% off up to 3 items now. Enter this coupon code during checkout or in your cart. Your unlimited-use code should be in your email box in just a few moments.

Click here to go to the Gear & Tactics Shop