Samuel Colt's revolving firearms were already legend in Texas before they became well-known around the globe, and they carried Texas history with them.

The post The Texas Link to the Most Popular Colts of the 1850s & 60s appeared first on Guns.com.

Samuel Colt’s revolving firearms were already legend in Texas before they became well-known around the globe, and a bit of Texas history was portrayed on some of the best known Colt wheelguns for decades.

Colt’s 1835 patent for his revolver system, according to legend sparked from an idea of a ship’s capstan, proved the basis of every wheel gun made by his company for the bulk of the 19th Century. From his early production 5-shot Paterson revolvers– which lacked a trigger guard but had a folding trigger– to his huge Walker and Dragoon series hand cannons of the 1840s, the former made for the Texas Rangers, Colt’s designs proved extremely popular, making them the Glocks of the day.

By 1851, Colt began producing a six-shot .36-caliber revolver that, due to an impressive 7.5-inch octagonal barrel, was 13-inches overall. Weighing 42-ounces, it was the same heft as today’s S&W Model 29, although a few inches longer.

This Colt Model 1851 3rd Model is available from a Guns.com Outlet member and is an excellent representation of the type.

When its cylinder chambers were stuffed with a 125-grain lead ball over 14-grains of decent black powder, it could deliver said lead at 760 fps, which translated to just 160 ft./lbs of energy– about the power of today’s .32 ACP cartridge using smokeless powder. Nothing crazy, but enough to get the job done with proper shot placement. Most importantly, it had six rounds on tap, which could beat any single-shot pistol of the day, all day.

To make his mechanical contraptions more aesthetically pleasing to the consumers of the day– and to provide an easy way to confirm if the gun being offered was a counterfeit knock-off– Colt around the same time began engraving the cylinders of his revolvers with assorted martial scenes. His 1848 Dragoons had a mounted combat scene. The Colt Pocket Pistol a stagecoach robbery.

The 1851 Colt? It was graced with the scene of a naval battle between two opposing squadrons of warships arrayed against each other, with linework designed by Connecticut engraver Waterman Ormsby, who was high in demand at the time to produce counterfeit-proof currency designs. 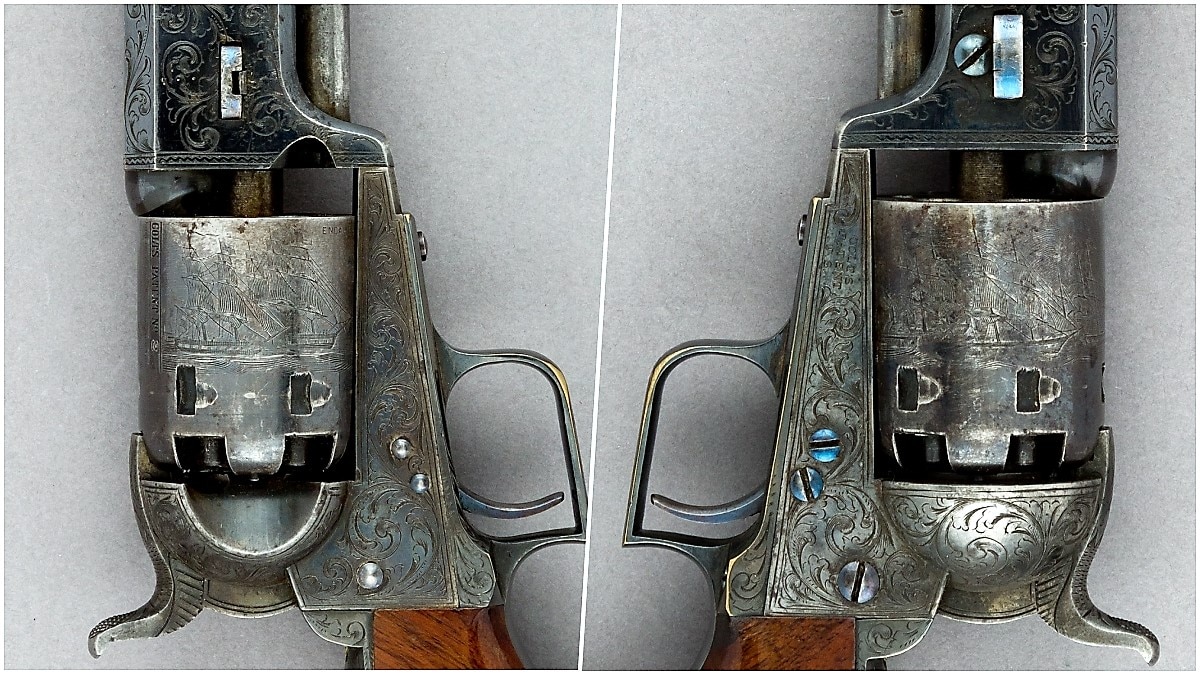 Detail of Colt Model 1851, Serial No. 2, in the collection of the Met, note the naval combat scene on the cylinder. Some 215,348 Colt Navy models were produced. (Photo: The Met/Open Access Image)

Ormsby’s scene portrays the little-known naval Battle of Campeche, which took place over two weeks across April and May 1843 between the Navy of the Texas Republic and local allies against the Mexican fleet along the shore of the Bay of Campeche in the Gulf of Mexico.

The Texas Navy, under Commodore Edwin Ward Moore, was equipped with two sailing ships, the Austin and the Wharton, and opposed a much larger Mexican fleet that included a pair of British built iron-hulled steam frigates. Although outnumbered, the Texans and their allies won the day as the Mexican fleet ultimately withdrew, with neither side losing any ships.

The engraving is inscribed “Engaged 16th May 1843,” and Colt himself directed the scene to be placed on the revolvers following correspondence with Moore in which the Texan Commodore said, “The confidence that your arms gave the officers and men under my command when off Campeche in 1843 and opposed to a vastly superior force is almost incredible. I would not sail if I could possibly avoid it without your repeating arms and I would have no other.” 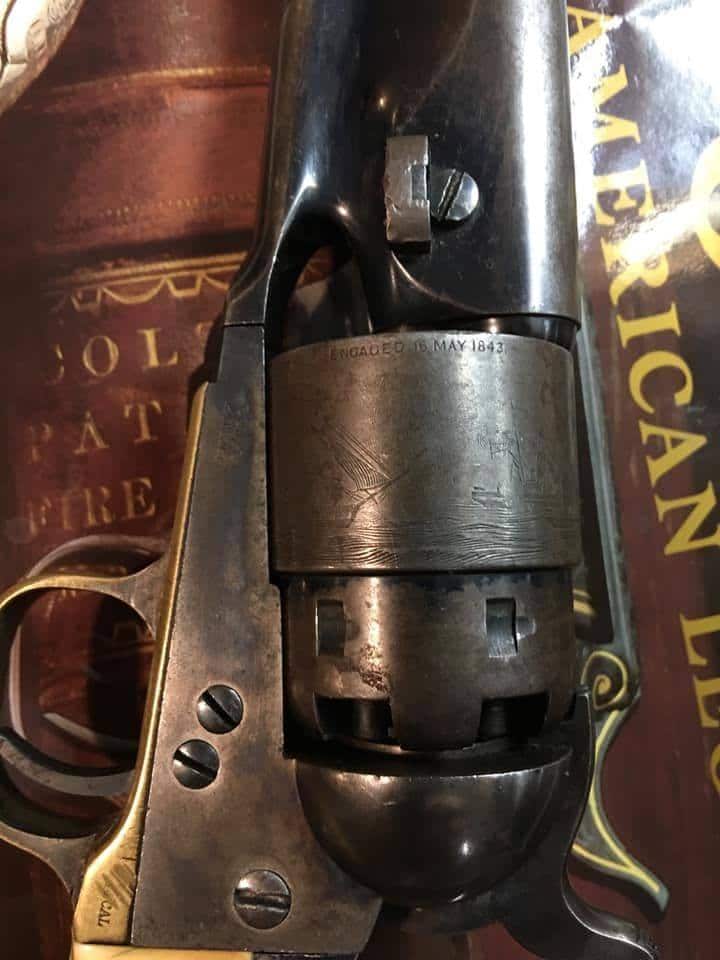 The engraving is inscribed “Engaged 16th May 1843,” and was designed by Waterman Ormsby. (Photo: Colt)

A standard feature of the Model 1851, the engraving led the revolver to be dubbed the “Colt Navy,” although it was neither designed for nor in the end adopted by any fleet. Nonetheless, the model proved extremely successful in both the commercial and military markets. The U.S. Army ordered no less than 17,000 Colt Navy models during the Civil War while individual state units and soldiers purchased their own guns out of pocket. 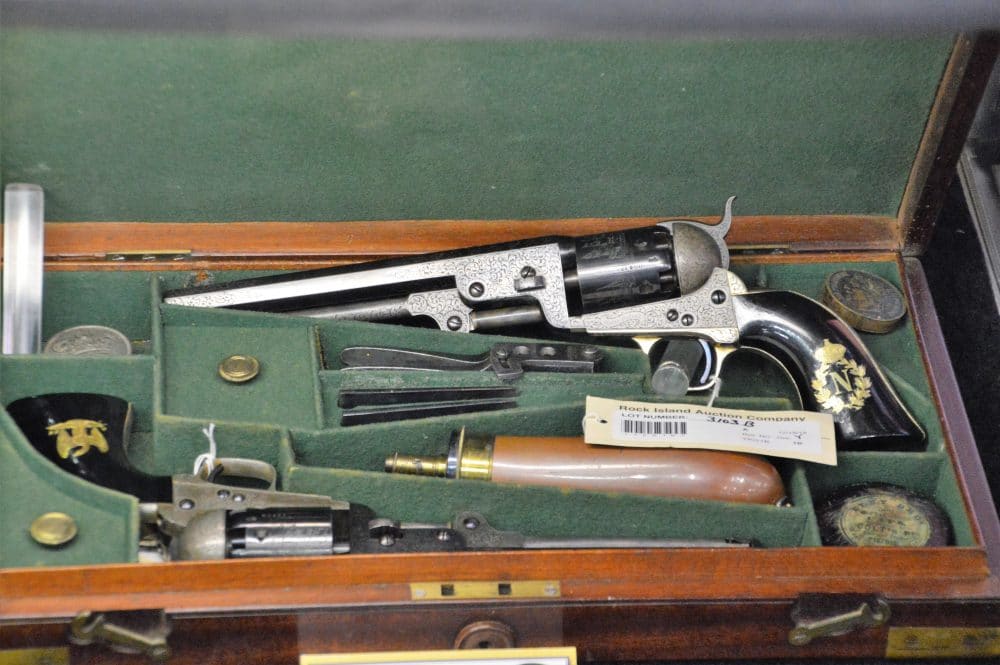 The Colt Model 1851 remained in production through 1871, and the engraving remained on both standard and presentation models. This boxed set of Colt Navy revolvers, which were presented to French Emperor Napoleon III, had gold inlay and ebony grips, but still rocked the Texas battle scene. These rare wheel guns sold at auction last year for $80,000. (Photo: Chris Eger/Guns.com) 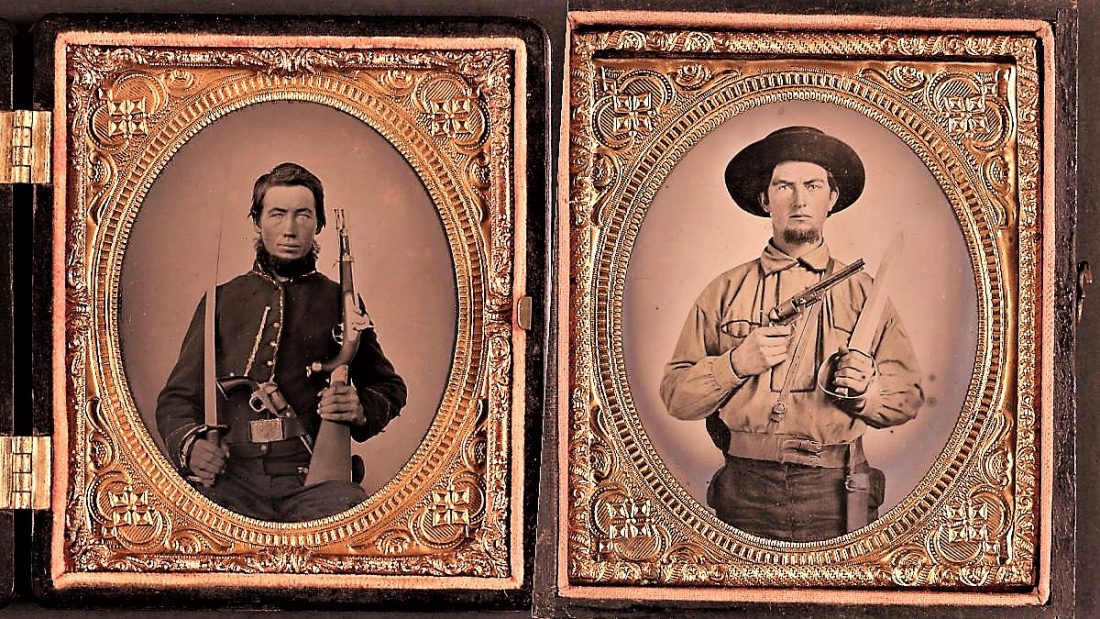 Colt Navy models were used on both sides of the Civil War, and often appear in period images. (Photos: Library of Congress) 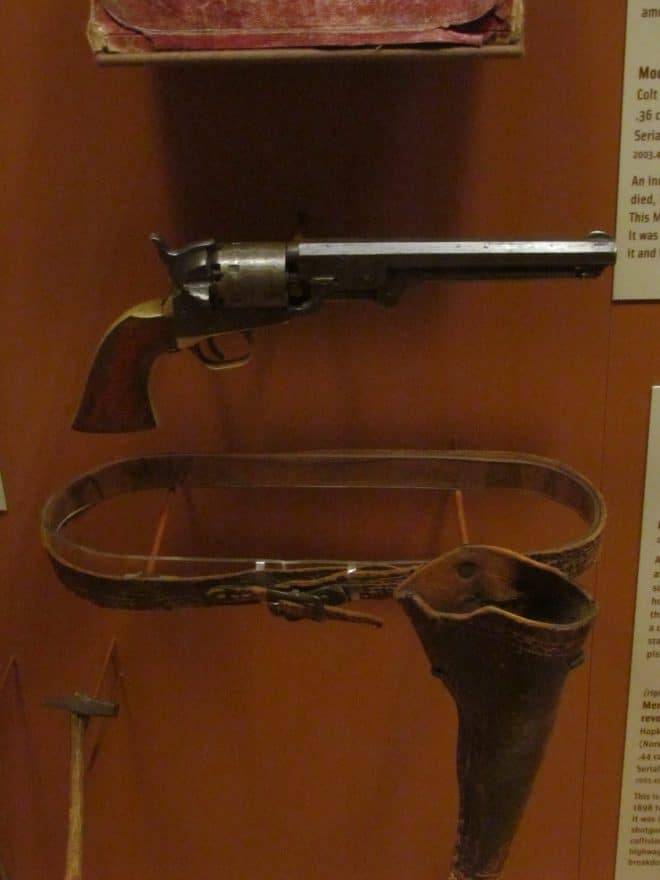 After the war, cheap surplus Colt 1851s remained popular in the Old West, used by such figures as the James Brothers and “Wild Bill” Hickok, veterans of the conflict. This Colt Navy was owned and carried by Jesse James and is currently in the Frazier Museum in Louisville. (Photo: Chris Eger/Guns.com)

However, the engraving was recycled on other models as well.

The Model 1860 Colt Army, a .44-caliber six-shooter that looked very much like its Model 1851 predecessor but with a round barrel and other updates used the same engraving. Of the more than 200,000 Colt Army models produced, all but the first 4,000– which had fluted cylinders– retained the Campeche engraving. The gun was the most prolific revolver purchased by the U.S. Army in the Civil War, with 129,730 bought under government contracts. 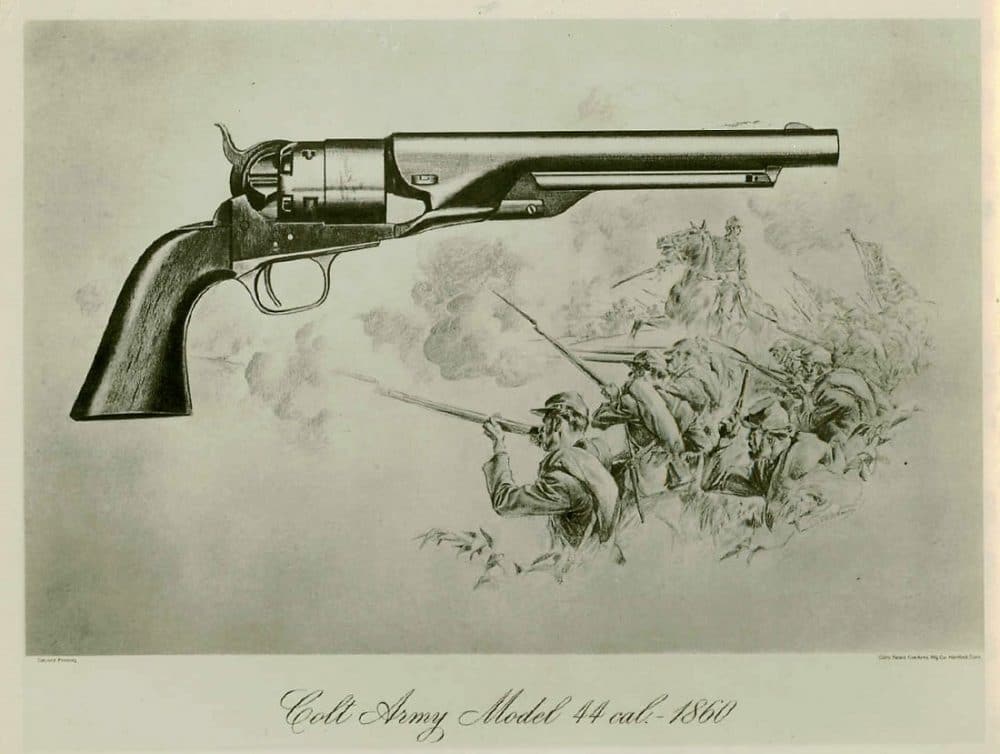 The Model 1860 Colt Army was the most common revolver used by the Union Army in the Civil War, with over 129,000 purchased. The second-most common was the .44-caliber Remington Army (Photo: Springfield Armory National Historic Site)

Finally, Colt used the engraving on the Colt 1861 Navy model, a .36-caliber round barreled revolver similar to the Colt Army but slightly shorter. Like the Model 1851, it remained in production until 1871, when Colt moved to switch over from cap-and-ball and cartridge conversions to full-on cartridge revolvers such as the Colt Peacemaker.

But that is another story.

The post The Texas Link to the Most Popular Colts of the 1850s & 60s appeared first on Guns.com.

Your unlimited-use code should be in your email box in just a few moments.

Enter your code in during the checkout process or in your shopping cart.